The European Commission sees great opportunities for Cloud Computing.
A new EU Strategy has been recently proposed to exploit the full potential of this innovation of ICT, spreading the benefits of the cloud in all sectors of the economy and public administrations.
In the opinion of the Vice President of the European Commission, Neelie Kroes, responsible for the Digital Agenda, a wide-ranging Cloud Computing should lead to more jobs and a substantial increase of EU GDP.

What is the EU strategy about?

Everyone knows that nowadays data and programs do not necessarily have to reside on a user’s PC and may be “hosted” on the Internet or – as one may say – “in the cloud”.

But where do data end up?

It’s an expert “hosting service provider” away from home or office that manages all the IT architecture, allowing users to store and / or process data and software on the Internet and access them from any mobile device.

Cloud computing is something much more common than one might think. Common, useful and profitable: for individual final users – Facebook-addicted – as well as for large organizations of people.

In both cases, managing online applications and tasks is very practical and involves large reductions in IT investment costs and lower support costs: significant economies of scale can reduce expenses for businesses of 10-20%, with important increases in productivity.


These advantages are not indifferent to the European institutions where a high-level strategy aiming to “embrace the potential of cloud computing in Europe” has just born.
Such enthusiasm is motivated by a potential net gain of 2.5 millions of new jobs in Europe and an annual increase of EU GDP corresponding to EUR 160 billion (about 1%), by 2020.

However, the European optimism is tempered by the diffidence of users who fear especially for data security and compatibility of computer applications.
Confidence in the cloud is not yet strong enough and will not be such, at least, until European common standards find space in the legislation of Member States and clearer contractual models are imposed on hosting providers.

Indeed the strategy presented by the European Commission seems to break down, one by one, the obstacles that undermine the success of Cloud Computing in businesses and public administrations.

The strategy provides for the establishment of European common standards for the “cloud” by 2013, with the approval of contractual arrangements that make it clear the legal obligations on “cloud providers”. Not only.
Providers that meet the standards will have a European certification of ‘reliability’.
There will also be guarantees of operational compatibility between different systems of “cloud” so users can transfer data from a cloud provider to another – or decide to withdraw – without risks.

The Commission did not miss anything.

The EU Cloud computing will be cheaper, safe for the security of data, not unfair to users.

The European Cloud Computing will also be green.

While the server data centers, more and more gigantic and widespread in hundreds of locations around the world, must remain switched on 24 hours a day with huge energy consumptions and CO2 emissions, the Commission points to an energy saving of 90% due the use of low-power microprocessors.

The measures proposed by the Commission and the arguments put forward in support of the Cloud are of all kinds and all colors.
It remains to be seen whether they will be sufficient to build a European confidence in implementing this solution; and to conquer the most difficult ones convinced to stand before the usual marketing initiative, loosing control on their lives, defenseless – as Richard Stallman, founder of the Free Software Foundation, told “The Guardian”- “put in the hands of whoever developed that software.”

COMMUNICATION FROM THE COMMISSION TO THE EUROPEAN PARLIAMENT, THE COUNCIL, THE EUROPEAN ECONOMIC AND SOCIAL COMMITTEE AND THE COMMITTEE OF THE REGIONS
Unleashing the Potential of Cloud Computing in Europe 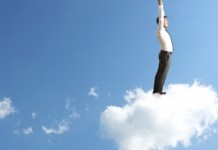